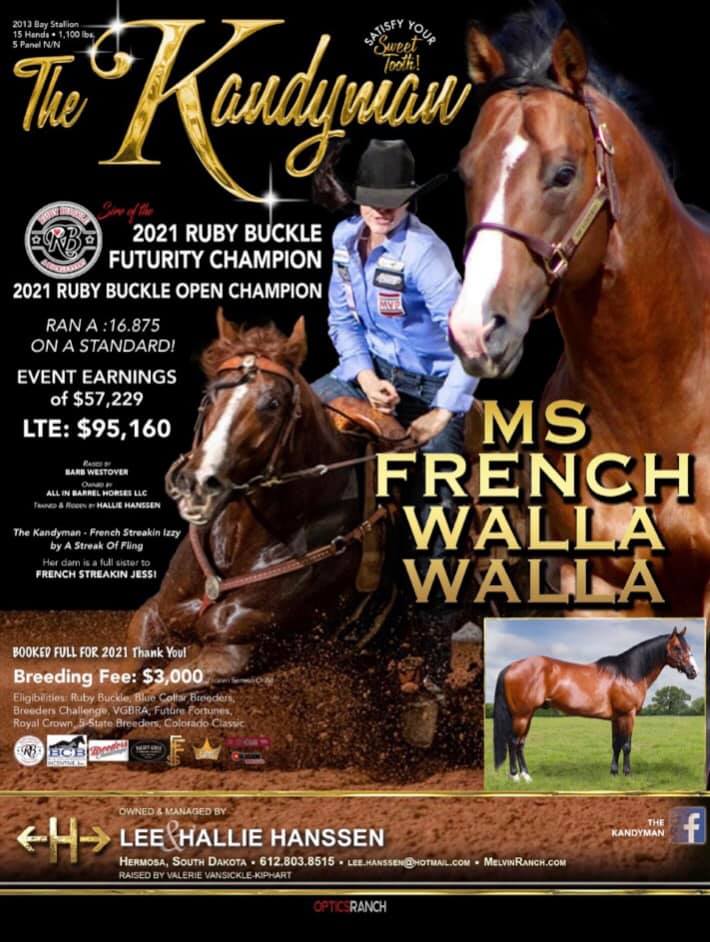 Making any sort of  tack change before an event is always done with much thought, consideration and a touch of  apprehension. Sometimes those changes aren’t born out of  necessity but rather sentimentality.

For veteran horsemen Lee and Hallie Hanssen of  Hermosa, South Dakota, the magnitude of  the $730,000 Ruby Buckle, held April 25-May 1, warranted a sentimental tack change. Ms French WallaWalla had earned the right to wear a memorial headstall that Danyelle Campbell had made with the mane of  her late sire The Kandyman decorating it’s browband tassel.

While Lee is usually the more emotional half  of  the couple, his million-dollar rider wife got a little weepy after taking the lead in the second round and aggregate of  the $260,000 Futurity with a 16.875 on a Standard Pattern.

“Right after I ran the 16.8, they wanted to do an interview,” noted Hallie Hanssen. “I’m usually not too emotional during inter-views, but that got to me a little bit.”Hanssen and Walla, who swept the Sand Cup Futurity just over a month ago, started their Ruby Buckle with a second-place 17.109 in the first round.

“I remember the first run when she took off for that first barrel I thought, ‘Oh my gosh! There is no way you’re going to be able to turn this’ as fast as she was running. I kind of  checked her a little and she was like ‘Whoa! Barrel!’ and just came back. I honestly don’t know how I stayed on her. She’s just so fast and can just turn and be going the other direction,” recalled the 2020 WCRA Women’s Rodeo World Champion.

They took the second round with the second fastest time of  the event, a 16.875.“The next run, it was really muggy that day and I didn’t warm her up too much,” she explained. “She’s not really hot when you warm her up but it was so muggy when you went inside the Lazy E that she was just sweating like crazy. I told Lee, ‘I hope she has some gas because she’s almost spent right now’ as sweaty as she was. She still had it in her gas tank I guess!”

With the Futurity running on Tuesday and Wednesday and the $460,000 Open running on Friday and Saturday, Hanssen had a long wait to see how they would fair with their carryover times.

When the final horse ran, Hanssen and Walla had taken both the Futurity and Open titles for total earnings of  $57,229.

View The Kandyman on the Blue Collar Breeders website