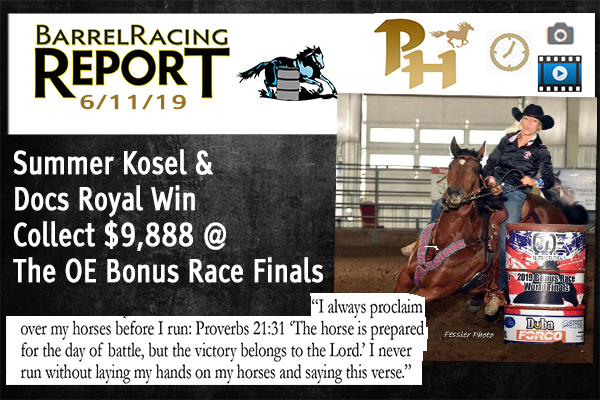 “I did have a very blessed weekend,” said Summer Kosel of Glenham, South Dakota. The barrel racer and mother of four, ranging in age from 13 to 4, took home $9,888 from the OE Bonus Race Finals, held June 6-9 in Lincoln, Nebraska. “I always proclaim over my horses before I run: Proverbs 21:31 ‘The horse is prepared for the day of battle, but the victory belongs to the Lord.’ I never run without laying my hands on my horses and saying this verse.”

Kosel, who operates Smoking Guns Rodeo with her husband Kevin, had six ID numbers, but only two horses to run. She made a total of eight runs on the weekend between her two horses and picked up checks on every single run she made aboard her 13-year-old mare Docs Royal Win (“Mini”).

“I had been in the other arena the whole day,” noted Kosel. “My daughter and I had drifted over (to the Bonus arena) when they were on about the last 20. I didn’t even know that my time was still leading. He announced that my time was still leading it, and my daughter says, ‘Why don’t we stay in here and watch to see if you end up winning it.’ I said, ‘I don’t know if I want to!’ She convinced ...  continued on page 6

Most Christians are familiar with the account of the prodigal son. Luke 15:11-24. Two sons. The younger one asked for his inheritance, received it and went wild! The elder stayed home and served his father. The money ran out for the younger one and he wound up in the pig pen! When he came to his senses he decided he should go home and just be a servant in his father’s house. But when he got close to home, his father saw him and ran to meet him! There was a great celebration! That son was restored. Praise God! Our heavenly Father is that way with us. We are free to stay in the kingdom of God and be blessed or go serve the world/devil and take our lumps. If you’ve been taking your lumps and want to come back to God, He will welcome you back with open arms.

Each morning we should get up and pray, “Lord, today let me be in the right place, at the right time, doing the right thing, with the right people”. If any of those things are missing...COME HOME!!!!!

Mike and Sherry Morrison pastor “Church at the Barn” in Gillette, WY. They also travel to other areas ministering at barrel races, ranches, rodeos, churches and home Bible studies. Check out our schedule online. You can also download all Bible studies by visiting our website: m-m-m.org or contact us at: PO Box 2439, Gillette, WY 82717, 307/685-2272.

View All Featured
posted by: